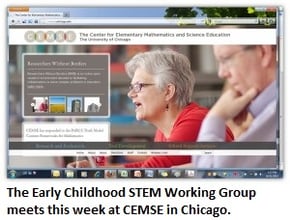 When the Engineering is Elementary curriculum was first being developed, one skeptic told EiE director Christine Cunningham, “You’re crazy. It’s impossible to teach engineering to elementary students!” Today, the Next Generation Science Standards (NGSS) have made K - 5 engineering mainstream. Meanwhile, the Obama administration is thinking about even younger engineers.

The President has made early childhood education a priority, including—at the urging of the National Science Board—early STEM education. But what does “quality Pre-K - K STEM education” look like? And how do you help teachers expand early STEM education nationwide? EiE’s director, Christine Cunningham, is one of 14 educators pondering such questions as part of the Early Childhood STEM Working Group, meeting this week in Chicago.

The project is a joint initiative of the University of Chicago’s Center for Elementary Math and Science Education (CEMSE) and the Early Math Collaborative at the Erikson Institute. It’s supported by a grant from the Searle Funds at The Chicago Community Trust.

The idea for the working group came from Erikson Institute co-founder Barbara Bowman, a former consultant to Secretary of Education Arne Duncan and the former chief early childhood education officer for the Chicago Public Schools. “In forming the group, we looked for people like Christine who have made a particular contribution to the field,” says CEMSE’s Debbie Leslie.

Early Exposure to STEM Can Make a Difference

This week’s meeting is the second for the group. “We’re pooling our knowledge of how young children develop STEM concepts and practices, with the goal of identifying early STEM research needs and practices that support early STEM learning,” says Cunningham. “A few states have looked at pre-school STEM, but there’s no consensus or guiding principles nationwide.”

There IS plenty of research to show that high-quality early childhood education pays huge dividends: it has lower costs and more lasting impact than education programs which start later. Early exposure to engaging STEM instruction reduces the risk that low-income and minority students will be turned off to these subjects.

Even with these encouraging findings, “it’s probably safe to say that science is relatively under-attended to in most early childhood classrooms,” says Leslie. “Or in classrooms that DO allow for open-ended play, children may be engineering, but without that label assigned to their activities.” On the other hand some of the BEST science education in the nation may be happening in early childhood classrooms because teachers aren’t under the pressure to test that shuts science out of the school day.

When the project wraps up next year, the Early Childhood STEM Working Group will release a report offering a concise set of recommendations for the field. The target audience is early childhood leaders and decision-makers nationwide—anyone who works to develop and support early childhood teachers.