The Power of Being Persistent

UPenn psychologist Angela Duckworth launched a media frenzy with her 2013 TED Talk on “grit.” This trait, she asserted, is essential for school success; students who have grit stay motivated in the face of adversity and even outright failure. 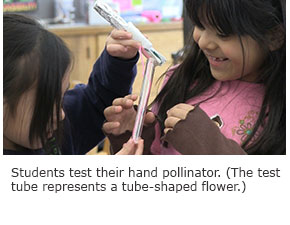 What Duckworth calls “grit,” the National Academy of Engineering calls optimism— “a world view in which . . . opportunities can be found in every challenge.”

What’s in a word? Call it grit, call it optimism—or call it persistence, as we do at EiE—the meaning is the same.

Watch these kids demonstrate the engineering habit of persistence!

We’ve made countless classroom observations of elementary students working on engineering design challenges, and we see students become visibly more resilient and tenacious as they work through an age-appropriate five-step engineering design process (Ask-Imagine-Plan-Create-Improve). Persistence is an “engineering habit of mind”—a positive way of thinking, and one that good engineering education can help promote. 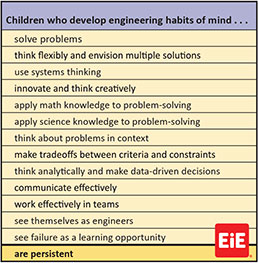 You can see kids exhibit the habit of persistence in the video above, shot in a first-grade classroom in rural Minnesota. The students have been working on the EiE agricultural engineering unit “Best of Bugs: Designing a Hand-Pollinator,” where the engineering design challenge is to make a hand-held device that will transfer pollen from one flower to another. (It’s not an esoteric challenge, by the way; hand pollination can be important for some crops, such as date palms and vanilla, and is used in the production of certain hybrid plants, including varieties of tomatoes.)

Before the scene in this video, the students worked in teams to design and build their pollinators, using materials such as pipe cleaners, tongue depressors, plastic straws, and pompoms. As the video opens, they’re about to evaluate how well their devices move “pollen” (baking soda) to a model flower.

One group of students designs a pollinator that works well on the very first try, liberally sprinkling the model daisy with pollen. But two other teams fail: their devices don’t transfer any pollen at all!

Notice that failure doesn’t seem to upset these young students. They’re smiling, and when the teacher asks what they need to do next, they eagerly chorus, “Improve!” Instead of giving up, they understand that they can learn from each attempt as they work toward their goal.

Although some students are naturally persistent, persistence is also a habit that can be taught. One useful strategy for modeling persistence is to share stories. For example, Dr. Seuss’s first book was rejected by 28 publishers, Lincoln lost eight elections, Michael Jordan was cut from his high basketball team, Walt Disney was fired from a newspaper for “lack of imagination,” Thomas Edison failed 1,000 times before engineering the first working light bulb. American history is full of tenacious, creative thinkers who, when at first they don’t succeed, simply try again.

You can also help students to develop what Stanford University professor Carol Dweck calls a "growth mindset" —the world view that success comes from effort, and not from a gift (such as intelligence or natural talent) you were lucky enough to be born with. This ASCD blog post offers some phrases to use.

Finally, think about how you talk about failure with your students. Send the message that success is possible and failure is valuable—a chance to learn, try again, and improve. Like the teacher in this video, you can create a classroom culture that brings out the power of persistence.