Creating a Culture of Problem Solving in Battle Ground, Indiana

It’s a groundbreaking year for Battle Ground Elementary School in Battle Ground, Indiana. For the first time, teachers across all grade levels will be using EiE. For many of them, EiE will be brand new, but they have experts in their midst: principal John Pearl and veteran fifth-grade science educator Diane Lehman have been championing EiE for 10 years. In the past decade, they’ve seen how EiE sets learners up for success in later grades, levels the playing field, and opens the doors for exciting real-world connections. Now, they’re ready to share everything they’ve learned with the educators in their school and across their district, so they can help even more learners discover their STEM identity.

At Battle Ground Elementary, classes have a unique structure—in collaboration with Dr. Marcia Gentry at Purdue University, they adopted a Cluster Grouping method that ensures each class has a blend of students who have been identified as high achieving, average achieving, and low achieving. They found that EiE is a great fit for their model. EiE curricula are designed to engage students who haven’t succeeded with traditional instruction, enabling them to find new ways to explore their skills and giving them confidence to express their unique perspectives.

As Lehman says, “It's not always your high ability, your gifted kids, that have the great ideas or the confidence to share their great ideas. Usually, it's the kid with more background experience, the ones that go outside and play, or tinker with LEGOs, or have been in the kitchen making brownies with their grandma.”

For Battle Ground’s high achieving population, EiE curricula have a different benefit: they give learners much needed tools to learn from setbacks and failure. For this group, Lehman says, these skills can help them cope with pressures from inside and outside of school.

“It seems like there's a lot of pressure on these kiddos not to fail and we start the year telling our parents that failure is okay,” she says. “Failure is a way to learn that if at first you don't succeed, we're going to try again. I think the engineering model lends itself beautifully to that.”

Battle Ground makes EiE units their own by embedding them across subject areas and bringing design challenges into the real world. For example, a fifth grade rafting trip down the Wabash River was used to provide real-world context to Engineering is Elementary units A Stick in the Mud: Evaluating a Landscape and Water, Water Everywhere: Designing Water Filters. A collaboration with the county naturalist allowed learners to see erosion control methods and learn about turbidity in real time. They also brought their erosion-proof bridge designs from the classroom to the riverbank and tested them in real soil! Lehman says, “I was impressed that when I had the kids reflect on the trip...testing [their designs] was their favorite part!”

The school also hosts engineering days to show parents and local engineers the designs students have been working on throughout the year. Pearl shares that students’ enthusiasm and their parents’ involvement leads to spontaneous engineering moments at home: students have been known to bring in improved water filters or bridges long after their class has finished an EiE unit, and “parents always seem to comment that their students have never been more excited about science than when we use EiE.”

Lessons that Go Beyond the Classroom 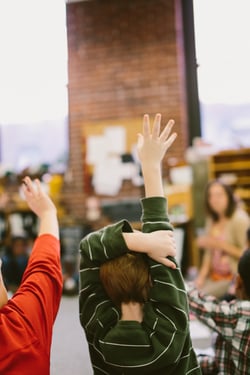 For Pearl and Lehman, the behavioral and educational benefits of hands-on engineering are clear in and out of school.

Pearl says that EiE units have been fantastic for collaborative, small-group work, even for learners that would typically socialize during these activities: “We find that students that may not be paying attention in class, students that may be a little on your impulsive side, students that you may not know their strengths—we have really found that we don't have any issues when we're doing an EiE kit,” he says. “We don't have the discipline worries. We don't have the lack of focus...When the EiE kit’s in action, the small groups are productive....[EiE] really walks them right through getting [their] thinking to be more systematic and more like an engineer, a better problem solver.”

Through STEM we're solving science problems, we're solving engineering problems, but we're also learning to talk with each other. We're learning to work as a group, and I think that's super important not just in school, but when they get out on the playground and they are fighting over some piece of equipment...or if they're in their neighborhood and they see something [concerning]. They have to problem solve to figure out what to do about those situations.

And when Battle Ground students move up to a middle school that enrolls students from multiple elementary schools, their problem solving prowess sets them apart. Pearl says that the middle school science teacher is “always excited to get our students, because she can tell that they’ve been exposed to engineering design.”

Make Your Own Success Story

What advice would EiE experts Pearl and Lehman share with educators thinking about trying EiE for the first time, in their own district and beyond?

Pearl says: “Just jump in and begin!...Once you get into the groove of working with EiE, you can pick up any kit, any binder, and you know where you’re going. I think that if I were brand new at a school, this might be the answer I’m looking for to get my kids to be critical thinkers, to get them thinking like engineers...There’s no way you could design your own challenge that would be as effective, structured, or complete as the EiE ones are. There’s nothing quite like doing a whole unit of EiE.”

Lehman says: “If they haven’t tried EiE, if they haven’t tried using STEM, it’s really a disservice to the kids. Because there’s conceptual learning that’s going to take place when they’re doing science, but [they’re missing] the problem solving, the improving, and even learning that failure is okay.” She adds that, “It’s those lightbulb moments where they go, ‘Oh my gosh! I never knew!’...all of [the EiE units] have those aha moments where somebody gets the best results they can and they celebrate that. You drag all the materials out, you make the messes, and you kind of live for those moments.”

We can’t wait to hear about all of the new “aha moments” happening throughout Battle Ground as the large scale EiE rollout begins. Best of luck, Battle Ground!

If you have a school or district success story to share, reach out to eie@mos.org for a chance to be featured on the blog!