The phenomenon called free-range parenting is making news these days. It’s a hands-off approach—the opposite of so-called helicopter parenting. Free-range parents let their kids take reasonable risks and figure things out for themselves; for example, walking to school unescorted, riding public transportation ditto, or (after some safety instruction) building things using sharp tools.

Come to think of it, free range is how most parents parented for most of the 20th century . . . but in our modern times, this approach can be controversial. For a variety of reasons, many parents (and teachers) prefer tighter control at home (and in the classroom). But in the elementary engineering classroom, free-range teaching is a highly effective strategy. 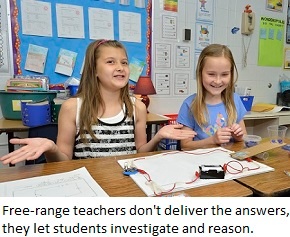 For years, classrooms have been teacher-centered: it’s been expected and understood that the teacher controls discourse, dispenses knowledge, and keeps a tight grip on behavior and discipline.

But check out this blog post from Caitlin Tucker, who took a more student-centered or free-range approach by charging her students with designing and executing a 5-week literature unit on their own—right down to the responsibility of checking that they’d developed all the skills specified in the Common Core ELA standards.

"Instead of crumbling into a state of chaos, as many teachers might fear would occur when students are given complete freedom, the level of focus and engagement was remarkable,” she writes. Tucker saw her students’ creativity blossom as they designed everything from multimedia vocabulary videos to board games.

We see the same thing in EiE classrooms where kids are doing hands-on engineering. Janet Bellavance, a second-grade teacher in Burlington, VT, recently shared how her “hands-off” approach has helped her students be self-reliant, collaborative, and creative.

Bellavance charged her students with using iPads to create digital (as opposed to conventional hand-written) engineering journals. In particular, students used the iPad’s photo/video capability to document their steps as they tested the different materials available to use in their designs.

“We DID teach a lesson on how to shoot video, create folders to save your work, and so on,” she says. But Bellavance and her teaching partner soon found that mostly they just needed to stand back and watch as the students explored the app they would be using to create e-journals . . .  and taught each other new things.

“Kids were showing each other how to crop photos and edit text,” she says. “Some of them knew more than we did—and the others picked things up quickly from their peers.” When the students started the actual testing phase and began collecting data, Bellavance continued her firm hands-off policy, not just for herself but for the group of parent helpers in the room.

“We forced ourselves to keep out of the way and let the students do all the videotaping,” she says. “I saw it as another example of the engineering design process: If the videos didn’t turn out well, the students could try again—and improve their skills as they did.”

Bellavance says, that's exactly what happened. “I think the creativity you see in the journals is a direct result of students taking ownership of the process,” she adds, noting that all her students were highly engaged in the activity, including those identified as English Language learners, behavior challenges, and students with I.E. P.s.

Are YOU a free-range teacher? Tell us how you apply this strategy in your EiE classroom! 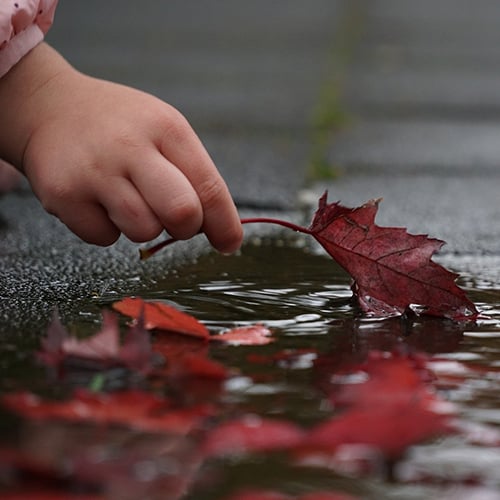