Engineering is Elementary is conducting a major research study to explore the question, “What makes an elementary engineering curriculum effective?” We’ve collected mountains of data from thousands of elementary students in hundreds of classrooms . . . and the information is helping us answer more than just this one question!

For example, we’re looking at how engineering notebooks can make learning more engaging. EiE researcher Jonathan Hertel presented some findings at the annual American Society for Engineering Education conference in New Orleans, and recently co-authored an article entitled "The Roles of Engineering Notebooks in Shaping Elementary Engineering Student Discourse and Practice" in the International Journal of Science Education.

“Asking students to ‘notebook’ is a common thing in science classes,” Hertel says. “As students systemically record their observations, analyses, and reflections, they experience how scientists really work.”

But though science notebooks are a well-established teaching tool, the idea of ENGINEERING notebooks is new—especially in the elementary grades.

. . .  among many other benefits. “Meanwhile, the value of engineering notebooks has hardly been studied,” Hertel says. “We do know that working engineers, like scientists, keep careful records of their plans, tests, and results. So it seems likely that engineering notebooks are also valuable for supporting learning.” 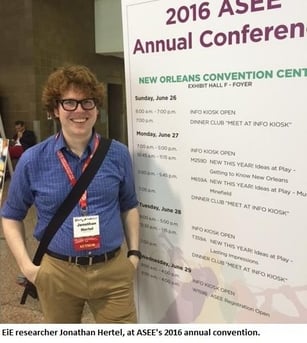 EiE’s research team created notebooks for the E4 study using the reproducible student handouts included in the Teacher Guide for each EiE unit. “But we knew that, to understand how keeping a notebook supports learning, we would have to do more than just look at what kids wrote,” Hertel said. “We needed to see how students interact with their notebooks. So we used another tool: video.”

The team examined roughly five hours of footage for each of four classrooms in the 2013–14 school year. Each set of videos followed a single student team as they worked on an engineering design challenge, such as designing an alarm circuit or cleaning up an oil spill.

“We transcribed the footage word for word,” Hertel says, “then combed through the transcripts to identify different behaviors—for example, writing in a notebook, looking up information, talking about data.” The next step: generate codes to describe the behaviors. Finally, the codes were applied to the transcript, looking for patterns of interaction.

Hertel says that the notebooks clearly helped scaffold students work, in several ways. One is simple—notebooks help you organize information. If students wonder, “What am I supposed to do next?” they can consult their notebooks. In one clip, a student who had been absent reviewed her teammate’s notebook and quickly got up to speed.

Notebooks also help reinforce the structure of the lesson. “We included the five-step EiE Engineering Design Process (EDP) on the last page of each notebook,” Hertel says. “In the video, you see one teacher remind students to check their notebooks and see what EDP step they are working on.”

More striking is how engineering notebooks supported students’ ability to work as a team and come to consensus on key decisions. Hertel cites one student group—Sophie, Emma, and Henry—who are discussing how to present their design, a process for cleaning up an oil spill. They’ve tried to use rubber bands like a boom to contain the spill in their desktop-sized “model river,” but the rubber bands sank and the oil escaped.

“You see them referring back to data they recorded earlier in their notebooks,” Hertel says. “They see their second design didn’t perform as well as the first. With the notebook as a scaffold, they’re able to identify particular materials—what worked well, and what did not.”

Beyond providing scaffolding, notebooks prompt students to apply authentic epistemic practices of science and engineering. For example, as Sophie, Emma, and Henry page through their notebooks to explore why their second design didn’t clean up oil as well as the first, they realize they didn’t properly control their testing. On their third try, they standardize their protocols.

By prompting students to record and review, notebooks help students develop a valuable habit, accountability, including the ability to stick with a plan. When the oil spill team tests their third design, the video shows Henry suggesting they add a rubber band at a particular step. “Sophie reminds him that they have a written plan showing the exact order they will deploy different materials,” Hertel says. “She says, ‘We have to do what we said we would do.’”

Notebooks also help students communicate their ideas—a finding that’s so obvious, it’s easy to overlook how important it can be. In one video clip, students review their draft design for an electrical circuit. One boy tries to tell his teammates there’s a problem, and also how to fix it. “When they don’t understand his verbal instructions, he’s able to point to a picture in another student’s notebook and explain with gestures,” Hertel says.

As students engage in authentic engineering practices, they start to build an identity—to say to themselves, “I am an engineer.”

Keeping an engineering notebook with plans and ideas reinforces this
budding identity.

“That’s especially important for children from underserved and underrepresented populations,” says EiE director Christine Cunningham. “Students can only consider engineering as a career choice if they know what engineers do and can picture themselves in that role.”