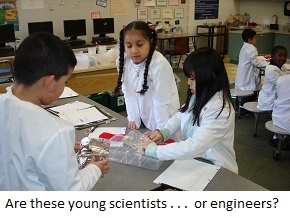 Scientists and engineers do have a lot in common, but they also have significant differences. The Next Generation Science Standards (NGSS) create new expectations that classroom teachers will integrate engineering with science instruction. But many teachers, and elementary teachers in particular, feel poorly prepared for this challenge.

With this need in mind, we've created a short video for our Spotlight series, a collection of videos that illuminate effective classroom practices for teaching elementary engineering with the EiE curriculum. “The Difference Between Science and Engineering” takes concise look at the connections between the two subjects, how they’re different, and why it’s important to teach them together in elementary school.

How Science and Engineering Differ

Scientists want to understand and explain how the world works: how the planets move, how living creatures grow and reproduce, what causes changes in the weather, and so on. The product of their research is knowledge—theories that explain natural phenomena.

Engineers take what scientists have learned about the physical world and use that knowledge to make things: technologies (devices or processes) that solve problems or improve life for the humans who populate our planet. In other words, scientists study the unknown; engineers build on what we already know.

Look around the room right now . . . virtually everything you see is an engineered technology created to solve a problem, from the computer on your desk and the chair that provides a comfortable seat to the windows that admit light but keep weather out and the clothes that protect your skin.

There’s quite a bit of overlap between the two fields. They rely on each other; you apply your science knowledge to engineering, and you need engineered technologies to do science. Scientists often design and build new equipment, and in the process of testing materials, engineers often make scientific discoveries.

In the classroom, as in the workplace, both subjects involve analysis and synthesis of data you’ve collected.  Whether you're a scientist or engineer, your work often relies on models—representations of physical systems. And despite the popular notion of scientist-as-solitary-genius, teamwork is critical in both fields, not to mention good communication skills.

In the classroom, both subjects will engage your students in hands-on work as they manipulate materials and conduct tests. Like working scientists and engineers, they’ll analyze data, and engage in argument from evidence to identify a solution.

In the end, students learn best when they understand WHY they’re learning something—why it matters, and how it connects to their life experiences. This kind of understanding comes naturally with classroom engineering.