Learning from Failure: Behind the Scenes of EiE 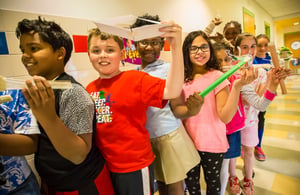 EiE turns 15 this year, and we’re excited to kick off our 15th anniversary celebration recollecting some of our earliest failures and, of course, triumphs. EiE fans and long-time blog readers will know that one of our most-loved Engineering Habits of Mind is “persisting and learning from failure.” We wouldn’t have made it to where we are today without a few challenges along the way! 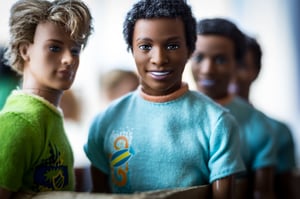 Last year, when our team cleaned our storage space, we were surprised by a few things we found. Amongst the construction paper and duct tape, there were several Barbies—and no one knew which of our engineering activities could possibly require the dolls! Our founder and director Christine Cunningham cleared up that mystery. They were from EiE’s early “Bungee Barbie” experimentation. Intended to be used as an opening activity for our professional development workshops, “Bungee Barbie” asked you to use rubber bands to create a bungee jump for a Barbie that protects the doll from hitting the ground. The earliest EiE team members tested out the activity and found it was difficult to ensure that you were testing the bungee set-up with the same amount of force each time. They decided we needed an alternative. Now, our workshops kick off with “Tower Power,” an activity that has participants work in teams to engineer the tallest index card tower that they can with limited resources. And luckily, we found another use for the dolls . . . office desk decorations! 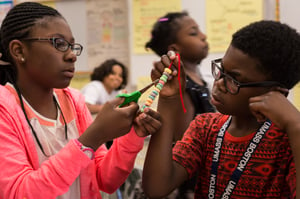 In Sounds Like Fun: Seeing Animal Sounds, student engineers learn about the field of acoustical engineering and the concepts of pitch, volume, and vibration. During the initial development phase, this activity looked very different from its current iteration. Originally, EiE team members intended to design an engineering challenge that would have students damp the sound of noisy, wind-up chattering teeth toys. However, it was difficult to determine the criteria for success as there was no reliable and cost-effective way for kids to measure sound that was available at the time—smartphones with decibel-measuring apps weren’t around yet! Still, the EiE team persisted. We came up with the current innovative lesson, which asks kids to design tactical or visual representations of bird calls using either pencil and paper or objects like beads and pasta. We’re proud to have developed an accessible, hands-on STEM activity that introduces kids to acoustical engineering without requiring any expensive equipment!

One of our favorite units, Now You’re Cooking: Designing Solar Ovens, encourages students to think like green engineers as they use their knowledge of insulators to design a solar oven. The original Solar Ovens design challenge asked students to create insulated homes for a hot, dry climate. However, tests of this challenge revealed that there were too many variables that affected the outcome besides insulation: the house shape, its design, and ventilation also had to be taken into consideration. While the EiE team eventually came up with the easier-to-test Solar Ovens, this earlier work did come in handy several years later when we developed our Engineering Everywhere unit Here Comes the Sun: Engineering Insulated Homes, which is designed for a slightly older audience. During this unit, middle schoolers in afterschool programs explore the properties of insulation and get to change the properties of the home structure itself.

An Eye Towards the Future

Over the past 15 years, the EiE team has learned that things don’t always go as planned, but it’s always worth persisting. We can’t wait to see what the next 15 will bring! Keep an eye on our blog for our continued 15th anniversary celebration. We plan to share more amusing anecdotes and behind-the-scenes peeks into the history of EiE all year long. 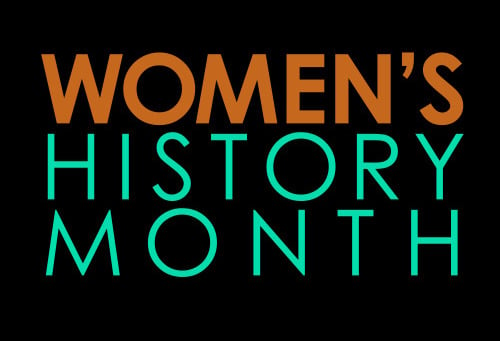 EWeek2021: Celebrate ‘Introduce A Girl to Engineering Day’ with These 3 Names to Know!
Thu, Feb 25